The lifecycle of a pneumatic tube system is relative to that of any other electro-mechanical device,  in the fact that wear and tear will be down to usage, rather than age-related. Most manufacturers, including Aerocom, recommend electrical equipment to be replaced after 10 years of average use, we have, however, had serviced Aerocom pneumatic tube systems in hospitals over 20 years old and in full working order. Another factor to consider is how technology evolves, the systems installed around the millennium are now a little antiquated in comparison with today’s technology.

The main reason an Aerocom AC3000 system can last so long is the upgradability, we have systems first installed 20+ years ago running with both the original and latest equipment, as the modern software can still support the earliest equipment. This gives us the unique opportunity to not only run old and new technology from a single control system, but it is also a very simple and almost non-disruptive process to swap out old for new stations.

Throughout the lifecycle of a PPM supported pneumatic tube system, Aerocom produce system reports twice every year, during the service, consumable parts will be replaced and recorded on the site-specific documentation.

Keeping accurate records allows us to audit and monitor overall performance, equipment condition, and system reliability.  As the installation reaches the 10-year milestone, we have our design manager review the system and produce an in-depth analysis of how the system has fared over the timescale.

Lifecycle replacement is by no means a target, there are fully serviced systems that at 10-years old, with light usage, will be listed as no action required. On the other hand, for sites where the tube system is extremely busy, we may be pulling forward the review to year 8. No two sites are the same. 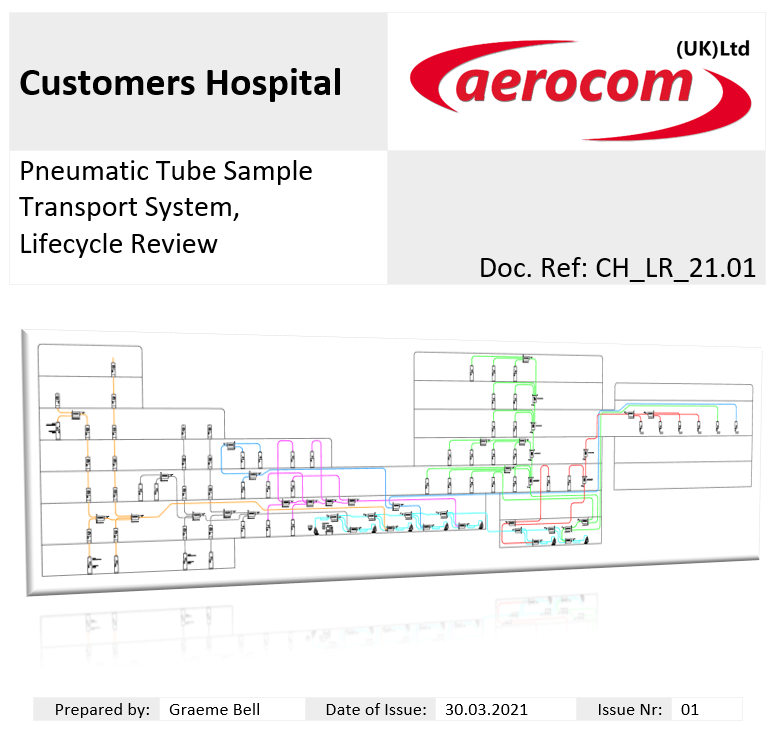 The return on investment from automation of repetitive delivery tasks is considerable, we estimate a major hospital pneumatic tube system repays on investment within 1 year of use. We can calculate the time the dispatches would be walked, multiplied by the number of portering staff required 24/7/365 to cover the same amount of work, the pneumatic tube delivers. It may be considered to be conjecture, but the figures show on a large and busy site, the system returns millions of pounds on the initial and running cost investment, over the lifecycle.

Example of an Aerocom Major Hospital Installation ROI over 12 years 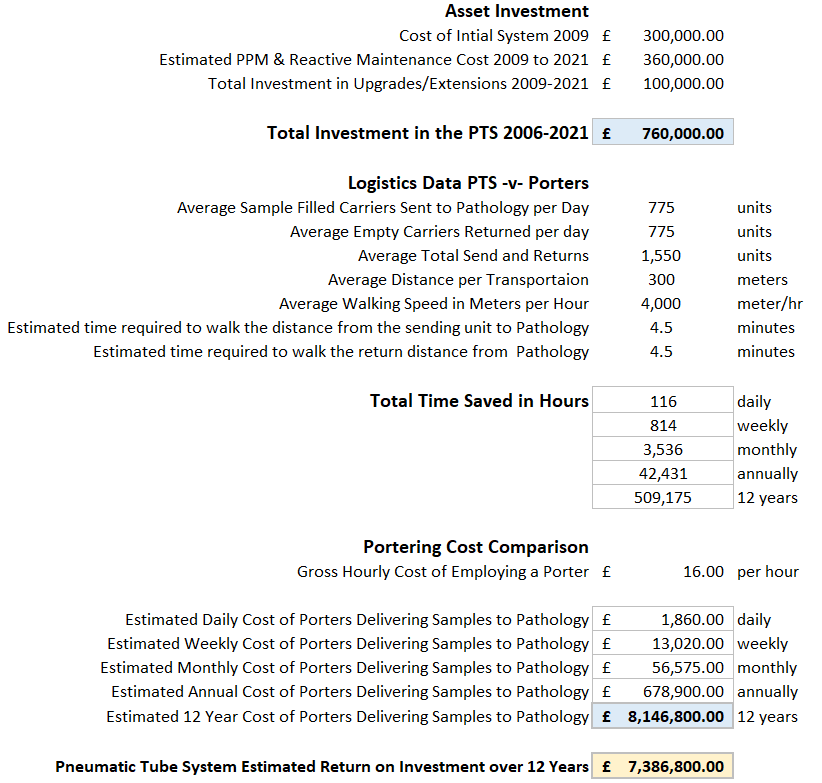 Even if our estimation is 100% over-inflated, we are still seeing huge sums of money returned on investment, the point is the reliable old pneumatic tube system savings will all have been used to finance other necessary services and go unbeknown as the contributor.

Another good reason to replace an older pneumatic tube system is to evaluate how the system has evolved over the years, both physically on the site, and any performance shortfalls in the original design due to extensions. It’s often the case a site will expand or re-organise area usage over the years, we often add extensions to systems that can, when accumulated, have knock-on effects on performance.

The most used Aerocom hospital pneumatic tube system in the UK is a huge site on the south coast. When the hospital first opened it was monitored and was sending +/-1100 carriers per day to and from pathology, 10 years down the line and we now have a 50% increase in traffic flow yet have only extended the system by 11% of the original number of stations. The modification was planned to increase the capacity, but we never expected such a huge increase in traffic flow, and neither did the pathology staff who have to unload and return the carriers.

Now the system is due for replacement we also have the opportunity to suggest other evolved product range innovations to ease the repetitive strain for lab staff, and extend the infrastructure to provide an even better service.

The opportunity to improve is always an added advantage when replacing lifecycle exhausted pneumatic tube systems. As the system has evolved, so has our equipment. Robotic enhancements are now being used to automate or enhance system operation, and new station models have been introduced which offer ergonomic improvements for users.

How disruptive is replacing a pneumatic tube system?

If it’s an existing Aerocom AC3000 system in many instances we will only need to shut down for a day or so to replace the transfer and key plant room equipment. The latest version of AC3000 software can bridge decades of previous versions, so once we have the infrastructure changed, we simply isolate and replace stations one by one with the rest of the system in full service. We will also work out of hours to keep downtime and disruption to a minimum. 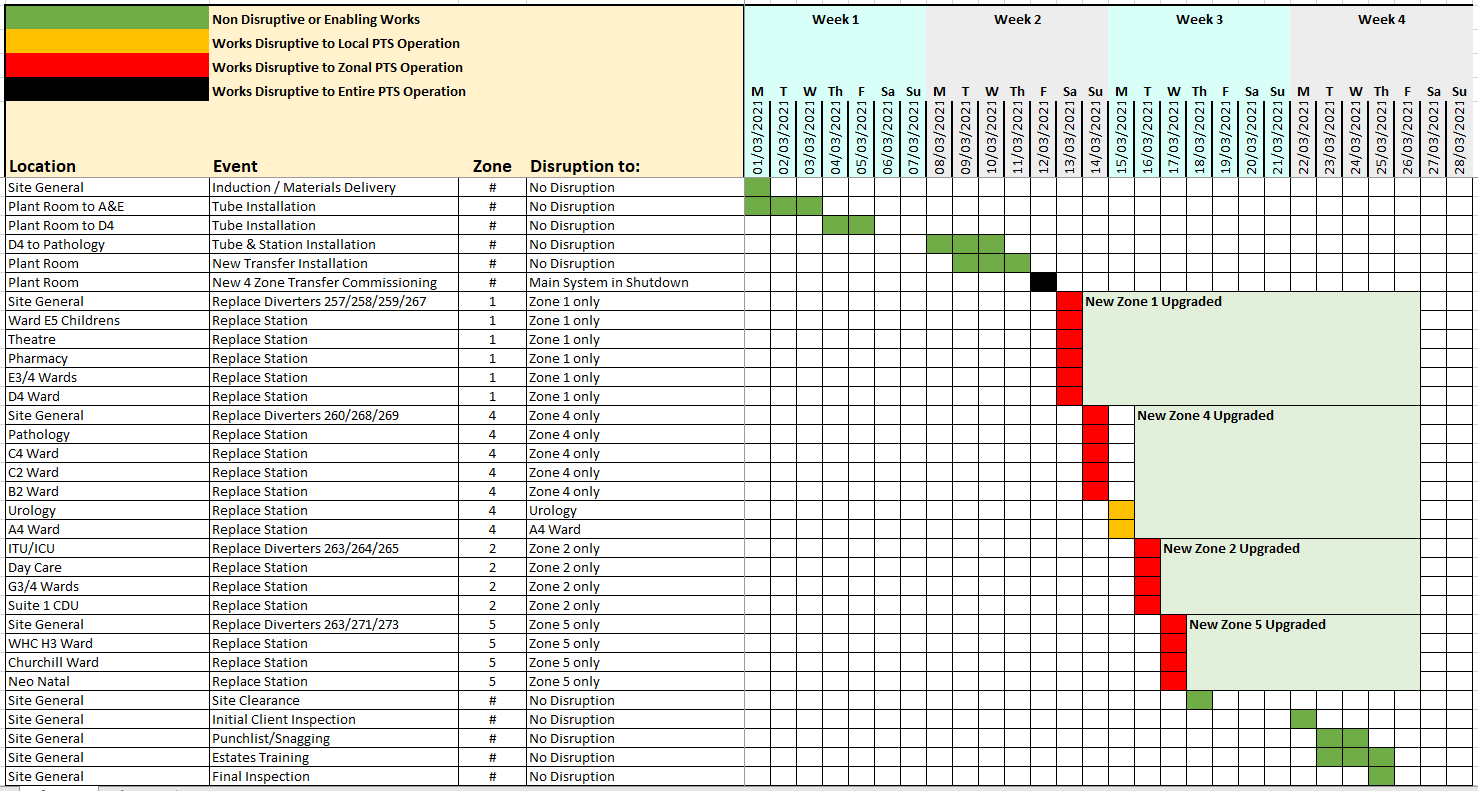 If it another manufacturers system that needs replacing, we have plenty of experience in this and several tricks up our sleeves to keep downtime to a minimum. If possible, we will build the new transfer infrastructure next to the existing, then switch over sections zone by zone, keeping two systems running until the switchover is complete.

For more information about the lifecycle replacement of pneumatic tube systems, please do not hesitate to contact us, we will provide a free survey and site-specific project plan to guide you through the process.