The facilities management Skanska invited Aerocom to survey the system initially in 2018 as they were suffering a lot of downtime and had difficulties getting the service contractor to attend the site. The main area of complaint was the system software regularly freezing up and the rotary transfer losing communication, stopping all cross-zone transports.

Our survey discovered the system controller to be operating on Windows XP, which has been unsupported by Microsoft since 2008. The pneumatic operating system itself was very basic, with limited capability to self-diagnose faults, and exchanged virtually no interface information from the PLC operated transfer. Fault reporting was overwhelming the cache memory of the very basic starter level control computer, limiting performance, and often switching to the German language when looking up the limited statistics available. In short, the system performance was sporadic. 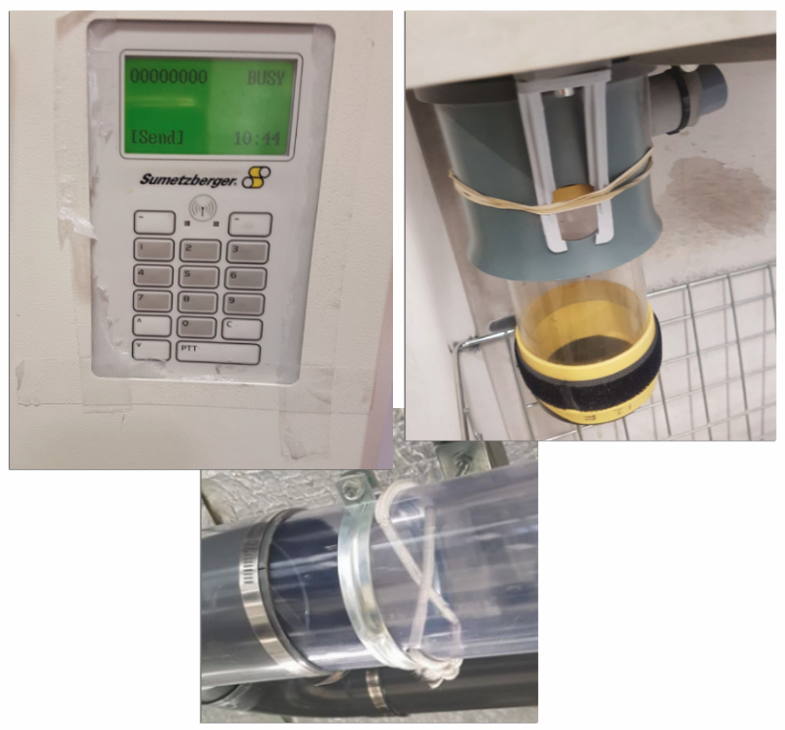 The system had reportedly never run well, and coupled with a delicate operating system, had lost user confidence to the extent many staff just gave up and used porters to walk samples to pathology.

The apparent lack of aftercare had also taken its toll, with the stations in medical areas suffering premature wear and tear from inadequate preventive maintenance. Sections were found to be held together with elastic bands and Sellotape.

The system zoning was also questionable, 9 working zones were ranging from low usage wards with 2 stations on some, with one major grouping of 20 high usage stations on a single zone. As an entity, the system was unbalanced, inefficiently serviced by the PPM supplier, and deemed by staff to be temperamental and unreliable.

Our design team set about the task of analysing and remodelling the system to an AC3000 model with 10 zones, splitting the huge zone into two separate lines.

Our first suggestion was adding a robotic linear coupler transfer to replace the troublesome rotary “power transfer” which we assured would hugely improve traffic flow, and rationalise the performance. 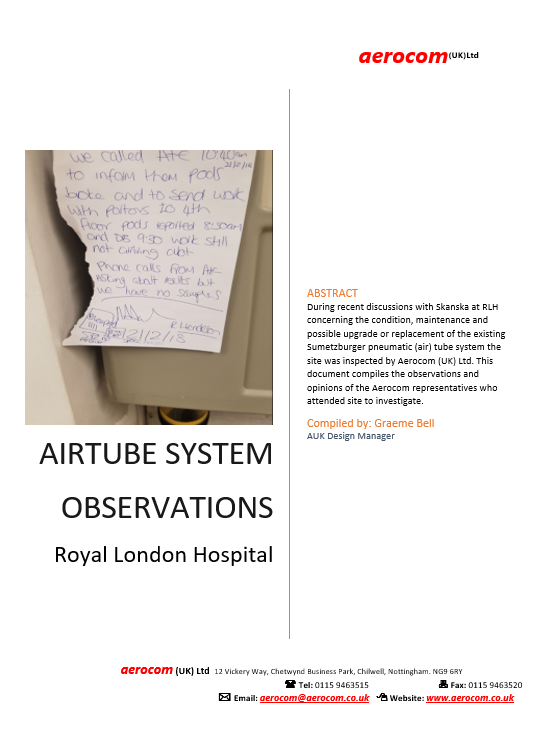 Using the existing tube infrastructure tube and cabling we planned to replace all equipment with compatible Aerocom AC3000 equipment.

It was only when we commissioned the renovated system, we discovered the amount of poorly fitted tube causing much of the problems at the hospital, there were lost carriers discovered dating back several months jammed in the worst sections.

The superior diagnostics of the Aerocom AC3000 system does not allow lost carriers to escape detection, every section was tested and snagged, all historical breakages and blockages eliminated. We delivered a trouble-free solution.

But that’s not the end of the story, impressed by the no-obligation system analysis and improvement strategy, Aerocom (UK) Ltd were invited by Skanska to also survey St. Barts Hospital. Both Royal London, and St. Barts are within the same Barts Health NHS Trust, the pneumatic tube system in St. Barts was also troublesome, originally from the same supplier.

Needless to say, Aerocom (UK) Ltd has replaced and upgraded both hospital pneumatic tube systems in 2020, safely working through the Covid-19 pandemic to restore both systems to full and reliable service with AC3000 equipment. The return on investment to Skanska and the Trust is reimbursed for freeing up the number of porters formerly occupied 24/7 with sample transportation, and eliminating FM staff having to wetnurse the old, unreliable system.

In our calculations, the ROI will pay back within the first year and will provide several millions of pounds in manpower cost savings for at least the next 10 years. Should anything go wrong, we have an on-call technician within 30 minutes of both hospitals, and a team of online technicians available on 24/7 standby every day of the year including holidays.